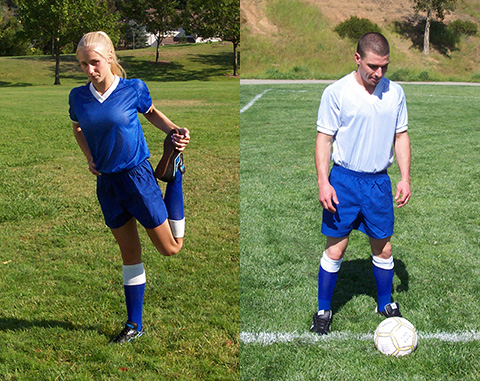 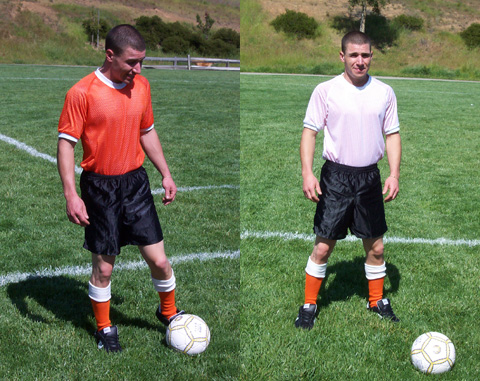 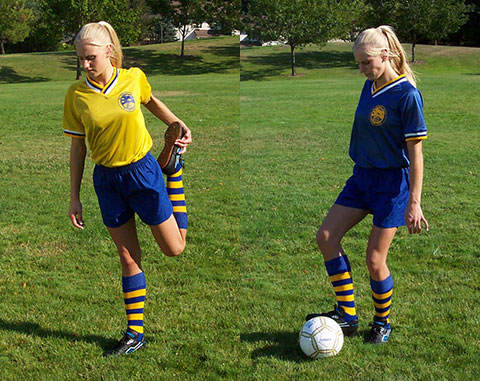 Custom Reversible Soccer Jerseys
Made in the USA
Made to order in your choice of color combinations.
Quantity Discounts Available For Youth Leagues
Fastest way to get a price quote is by Email.
Email your reversible colors, quantity, needed delivery date.

Made In USA Athletic Uniforms

The custom soccer and basketball uniforms by Team Sports Distributors are made in the USA. As the owner of Team Sports Distributors I am very aware of the importance of products produced in our country by our U.S. citizens because this type of economic activity helps our country and its people the most. For example, whenever we produce athletic uniforms and sell them a number of U.S. people benefit and share in this money generating and circulating activity. Some of these are U.S. mills that produce fabric, trim, thread and garment labels. Along with their suppliers of fiber, yarn, and manufacturing machinery. The pattern person that does the pattern and sizing work. The cutter of the fabric. The seamstresses who sew the uniforms. The companies that make and service the cutting, sewing and pattern equipment. The software developers throughout the entire manufacturing process. The people who screen print the uniforms. The graphic artist who designs the graphics. The companies that make the ink, other screen printing supplies and machinery used in the screen printing process. The trucking or shipping companies who deliver the fabric, trim, ink and other goods used in the manufacturing process along with the final end product shipped to the customer. Any sales person, business or store involved  in the sale of these uniforms. Team Sports Distributors over the last 30 years has produced its custom athletic uniforms with the use of U.S. citizens and this type of economic activity is beneficial to the U.S. economy. Economically speaking, this results in an increase in the U.S. gross domestic product without increasing our U.S. trade deficit.

Now compare this favorable and positive U.S. economic activity with uniforms or products that are imported from other countries for sale in the U.S. The only U.S. people that economically benefit are the multi-national companies that import the goods and the sales people, businesses or stores who sell the goods to the end users. And sometimes these multi-national companies even set up offices on foreign shores to avoid U.S. income and other taxes. U.S. ports who receive the imported products on U.S. shores may benefit, but even this can be sold for management and company profit purposes to foreign companies. U.S. shipping and trucking companies might possibly benefit, but the ocean line shipping company is likely foreign and now with the latest development with NAFTA a foreign trucking company and driver may soon be able to bring the finished products all the way to the door of the United States address of the multi-national company.

The problem with our United States foreign trade now however, is that we are outsourcing the production of just about everything under the sun (figurative language). We have given up many of our nation’s niche markets that we were formerly good at and economical at producing. And unlike just about every other nation on earth our national government policy has currently very little if any tariff or tax incentive protection against outsourcing our jobs, products and services to the labor of foreign nations. This has resulted in a ballooning U.S. trade deficit of currently as of 2007, about 800 billion dollars a year. To counter act this great loss of money every year our government representatives, especially at the federal and also at the state level, have been borrowing money at an ever increasing and alarming rate.  This borrowing of money via the vehicle of government bonds sold to foreign and domestic private investors and even foreign governments acts to soften and hide the effect that the loss of such a great amount of money has to our U.S. economy.  This hides the effects, but does not address the root of the problem that being the loss of money in our economy through foreign trade to cheaper labor nations who protect their own key industries while our nation does not. Under this scenario our middle class loses jobs all over the nation and our government and our consumers become indebted to our creditors and vulnerable to them.

This scenario is due to a spirit of greed that has swept and blinded our nation and economically injured the majority of its people and middle class. And again it is only because of ever increasing government and consumer debt that this is not experienced now more harshly. Rather than buy American made products with the money used for these purchases distributed throughout our entire national economy we have succumbed to the greed of multi-national companies who distribute goods made with cheap foreign labor just so they can increase their corporate profits while the end price to consumers has stayed about the same or increased slightly with inflation. This has also caused other companies out of survival to buy foreign made cheaper labor products for resale when they would rather buy made in the USA products to help stimulate our economy. We can not continue on this path of debt indefinitely. Buying made in the U.S.A. products helps break this cycle of debt while keeping the flow of money, goods and services in our U.S. economy.

Yours in Athletics and Our Nation,
Mark Sanguinetti, Owner/Manager
Team Sports Distributors